About the gaku-biwa, or biwa (lute) used in gagaku

This instrument was most popular from the end of the Heian period to the beginning of the Kamakura period, that is, from the 12th to early 13th centuries. There were many musicians—emperors, highly ranked courtiers, professional musicians, and Buddhist priests—who strove to master the instrument. The Chancellor Fujiwara no Moronaga (1138–92) was a master biwa player who compiled a 12-scroll collection of notation for the instrument entitled Sango yōroku (‘Essentials for the three-five [instrument];’ ‘three-five’ referring to the traditional length of the instrument, 3-shaku 5-sun, or approximately 106 cm.

The first instrument of this type appeared in West Asia in ancient times. It spread east along the Silk Road, and arrived in Japan by the 8th century. The Japanese musician Fujiwara no Sadatoshi (807–67) studied the instrument in China and returned to Japan with notation for the instrument. Many tales later developed about his exploits and the biwa tradition, and it became well known in cultural circles.

The biwa used in gagaku is called the gaku-biwa. It is a pear-shaped 4-stringed lute with a bent neck. Two other extinct lutes preserved in the 8th-century repository Shōsō-in (in Nara) have different structures and origins: the genkan is a 4-stringed banjo-like instrument with origins in China, while the gogen is a straight-necked 5-stringed instrument with origins in India. These lutes were thought to provide a means of communicating with the deities and the other world, and of pacifying the human spirit.

Although she feels that attaining the level of the masters of the instrument (whom she admires) will always require continued efforts, Kahoru Nakamura hopes to contribute to keeping its spiritual tradition alive, listening carefully to the sounds that she, and her fellow musicians, send into the world. 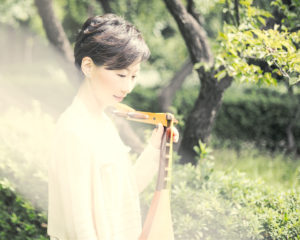